The Placa – west to east

Placa is derived from the Greek and Latin Platea which we translate as “street”. The present shape of the Placa was as a result of the earthquake of 1667 when Dubrovnik was rebuilt hastily after destruction and fires.  The unified construction of two rows of stone houses, of equal height with similar fronts and similar interior arrangement, and built in the Baroque style now form the appearance of the Placa. The Senate of the Republic ruled that every house should have space for several shops on the ground floor. Placa is the main open urban area in Dubrovnik and favoured as a gathering place and promenade. It is the main business street of the old city centre and popular with processions and feasts. The street divides the old city into northern and southern halves and is the shortest route between the western and eastern gates. It was created at the end of the 11th century. 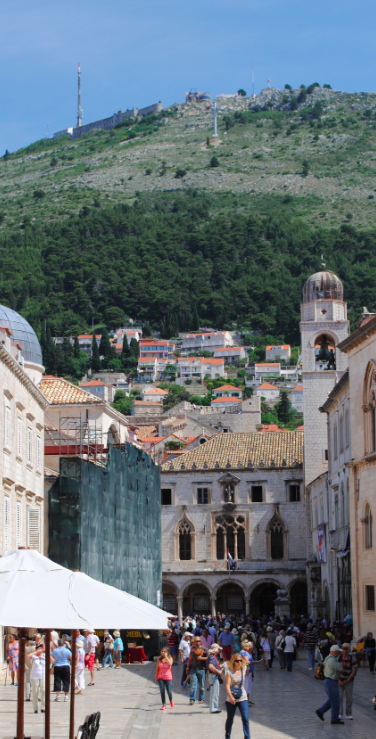 In the western end of the Placa, close to the Pile Gate, the street widens into Paskoja Milicevica Square where the Franciscan Monastery is located. At the opposite, eastern end the Placa widens into Luza square. This square was formerly used as a market place. A great number of  important administrative and sacral buildings are situated around the square such as the Baroque church of St Blasius, the patron saint of Dubrovnik, Little Onofrio’s Fountain,  Sponza Palace and the Mint. The main festivities take place on Luza square including the feast of St Blasius and the opening ceremony of the summer festival.

Street music along the Placa