Located on Midland Road is the Swadlincote Constitutional Club. The Edwardian building features an arched entrance, sash windows and coped brickwork. The building was included in a conservation scheme in 2008 during which several buildings in Swadlincote underwent repairs and restorations. Located on West Street is the former Town Hall – now Market Hall. The brick building was erected in 1861 with money raised from public subscriptions. A ‘Petty Crimes Court’ was held every Tuesday under the clock which cost the sum of £44.

The exterior of the hall on Midland Road features five arched windows with buttresses incorporating four shops below. The row of shops were added to the side of the Market Hall in the 1950’s. Stone steps from the side lead up to the main arched entrance.

Built with funds raised by the Reverend J.B.Stevens, the slogan ‘Time the Avenger’ was inscribed below the clock as a condition for a donation of £20 by a member of the local gentry. Sir Henry and Lady Sophia Des Voeux  both contributed £20 each towards the building of the Town Hall.

Situated down a quiet lane by the banks of the Trent and close to the historic Swarkestone bridge is the church of St James. The church was originally constructed in the 12th century and is built with ashlar and rubble stone. The building was heavily restored in 1874-76 by F.J.Robinson with only the 14th century tower and 16th century Harpur chancel remaining intact.

Sculpted angel tombstone in the graveyard

The church is of St James is Grade II* Listed. The church was heavily restored by the Reverend Thomas Butler in the 1860’s and is Grade I Listed.

Set in the Georgian market town of Melbourne in Derbyshire, the Parish church is one of five churches in the town. The Domesday book records a church and priest here in 1086. Built in 1120, it has been described as a “cathedral in miniature” due to being one of the most ambitiously planned Norman parish churches in Britain. Normally found in cathedral and abbey churches, it has an aisle nave extending six bays from a twin tower west facade. Except for the eastern end, most of the original masonry is intact.

The bell stage of the tower was added in 1602. Gilbert Scott undertook a restoration of the church in 1859-1862 but parts of the church date from the restoration in the 1630’s. St Michael & St Mary’s church is Grade I Listed. 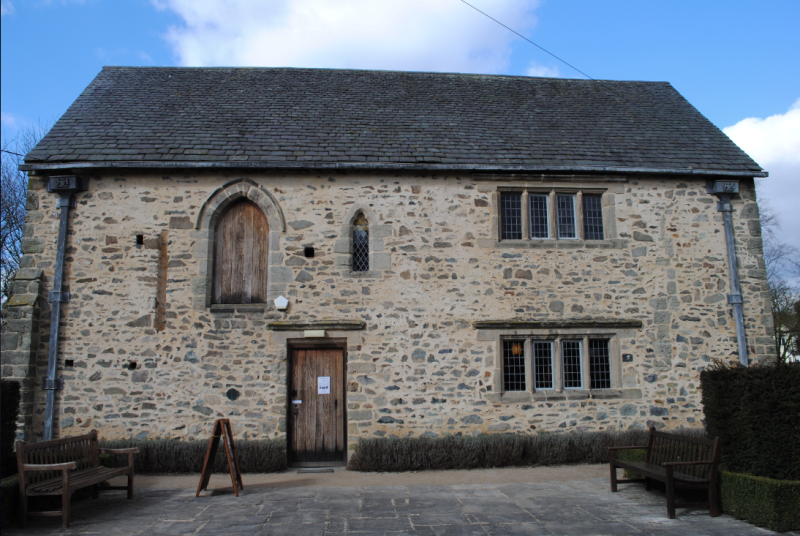 Donington le Heath Manor House is situated on the outskirts of Coalville and close to the village of Hugglescote in Leicestershire. From some of the remaining timbers, tree-ring dating suggests that this 13th century medieval Manor House was built between 1288 and 1295.

During the 15th and 16th centuries, the Manor House was owned by the Digby family. Sir John Digby fought at Bosworth Battlefield for Henry Tudor in 1485. In 1574, the property was owned by Everard Digby who was a close friend of Guy Fawkes. In 1606 he was executed for being one of the Gunpowder plotters.

The Manor House was opened as a museum in 1973 and continues to hold re-enactments and activities throughout the year. The 17th century style garden features a herb garden, flower gardens, an orchard and a maze. Located on Forest Road in Coalville is Newbridge High School. The school was built in 1909 and was originally named the County Grammar School of King Edward VII. The brick facade features a stone entrance, stone quoins and stone finials.

An inscription above the entrance doorway bears the original name