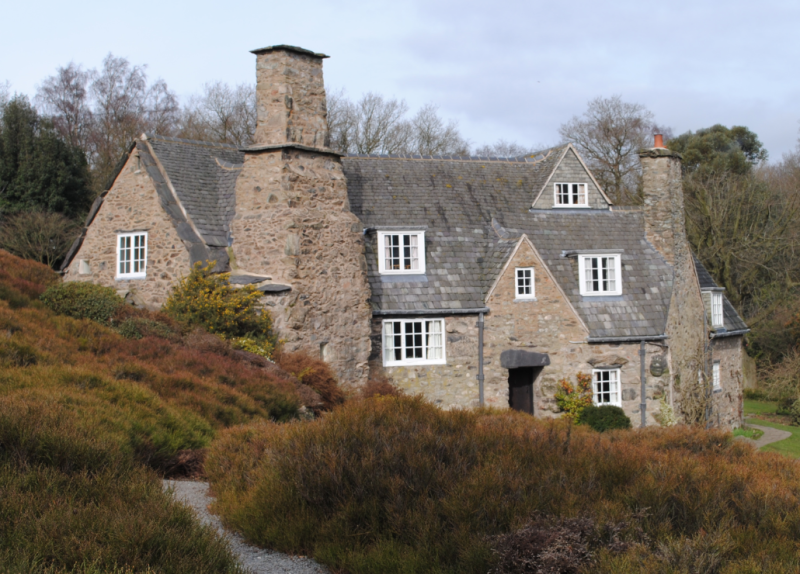 Stoneywell Cottage emerges from the surrounding landscape and was built as a summer house for Leicester industrialist Sydney Gimson, director of Gimson & Co. Vulcan Works. This wonderful building was designed by the Arts & Crafts architect and furniture designer Ernest Gimson and built with fellow architect Detmar Blow. Stoneywell Cottage remained in the Gimson family for three generations until the National Trust acquired it in 2012.

Completed in 1899, the building is constructed of granite and slate rubble stone and originally had a thatched roof. Following a fire in 1939, the roof was replaced with Swithland slate by Humphrey Gimson. Stoneywell features original woodwork throughout the building and fully incorporates the simplicity of the Arts & Crafts movement. 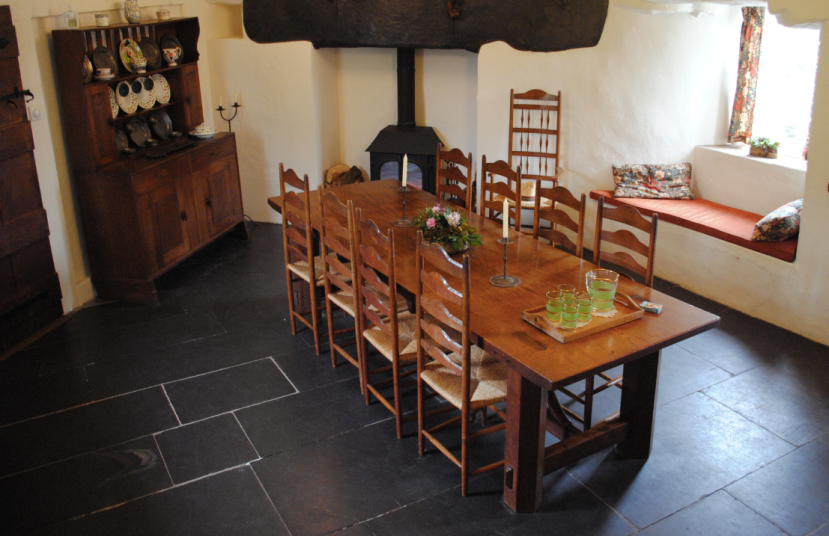 The Dining Room is the first room you enter through the front door and was originally the kitchen until 1953. The last owners of Stoneywell, Donald and Anne Gimson, created a kitchen behind the door near the dresser (above top left) which had been the larder, earth closet and coal store. The beautiful oak table dominates the centre of the room and was made by Sidney Barnsley. The Sitting Room is accessed by a broad flight of slate stairs from the Dining Room. Providing wonderful views from the window seats, the room is an idyllic setting to unwind. The room features an inglenook fire, an Orkney chair and rush-seated chairs made for the National Trust by Lawrence Neil who still uses many of Gimson’s tools. The Main Bedroom is accessed by a staircase from the Sitting Room below and features wonderful furniture, exposed beams and a triangular one light window. This quirky room has a walnut coffer (above right) which was designed and carved by Joseph Armitage. The coffer was made for Basil Gimson’s 21st birthday by Sidney Barnsley and was bought to Stoneywell in 1947. 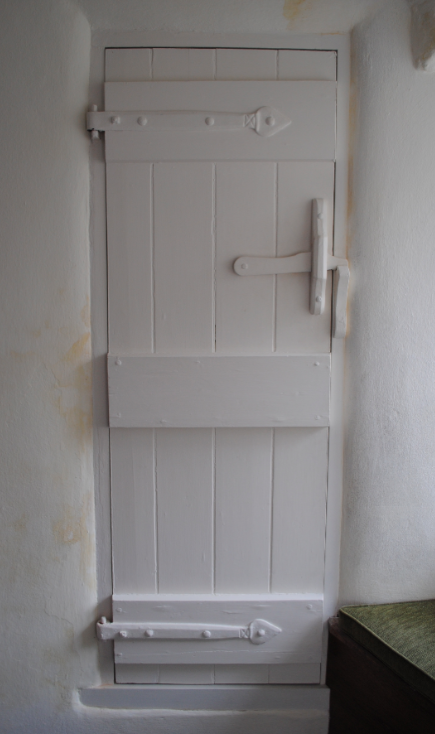 In the 1950’s, the Walkthrough Bedroom (below) became a Nursery for Donald and Anne’s daughter Sally. The room has a beautiful colour print above the door to the landing which is from a painting by a Viennese schoolchild. The print was sold to raise money for the Red Cross following World War One as Sydney had been involved in helping Belgian refugees who had fled from Germany. The Well Room (below) was so named owing to the fact that you step down into the room. The room was used as a bedroom for Donald’s son Roger but had previously been used as a summerhouse. Edward Barnsley was commissioned to make the bookcases which fit into the eaves of the room and accommodate the second hand books collected by Basil Gimson. The Well Room has a wonderful collection of furniture and working toys. The two cane chairs above were made by the Leicester firm Dryad. Reviving the traditional craft of basket making, Harry Peach, who was a friend of Sydney Gimson, followed the fashions of the continent but the firm’s production was sadly ended with the invention of the American Lloyd Loom. The bedroom on the top floor of the building was used by many visitors to Stoneywell and was named Mount Olympus – the highest point in the ancient Greek world. The room was much smaller than the present size before the fire of 1939 and was accessed by a ladder from the Nursery. The room has a wonderful collection of Arthur Ransom novels and a chess set (below) made by Donald Gimson. Towards Mill Lane is the conically roofed Well House (below). The Pump House is shared with Lea Cottage and was built in 1899 by Ernest Gimson for Mentor and Sydney Gimson. The one storey round building is constructed of granite and slate rubble stone with a Swithland slate roof and is Grade II Listed. Stoneywell Cottage is Grade II* Listed. 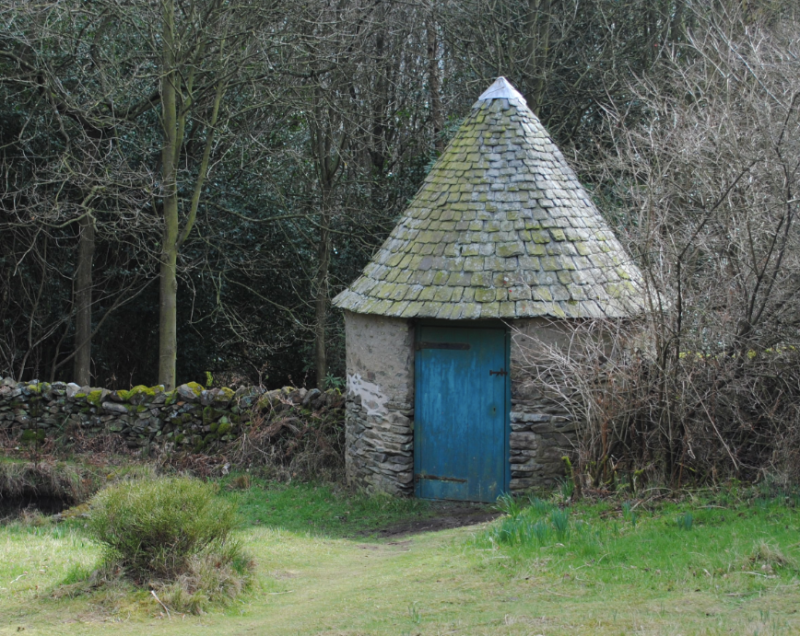 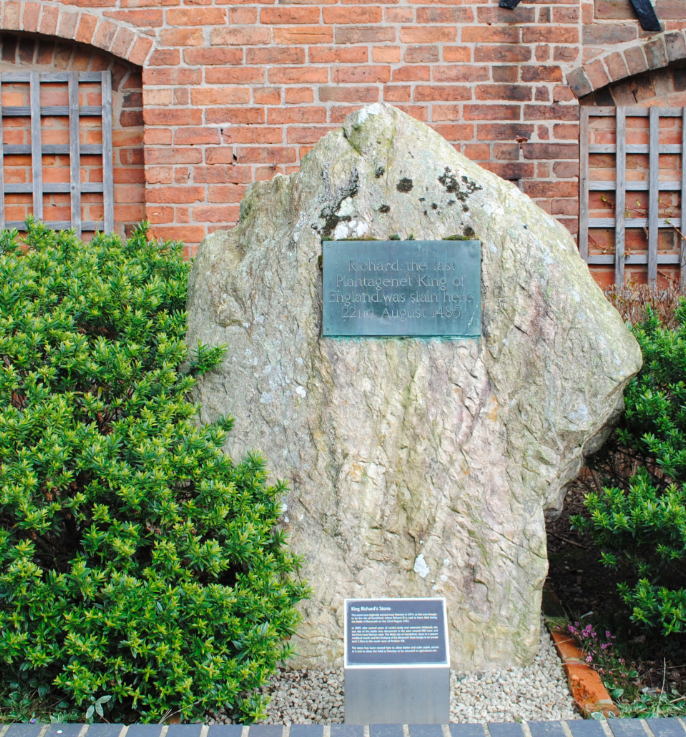 Outside Bosworth Battlefield Heritage Centre stands King Richard’s Stone. The stone was originally erected near Shenton in 1974 as this was believed to be the site of Sandeford, where Richard III is said to have died during the Battle of Bosworth on 22nd August 1485. Following extensive fieldwork and careful study, the true site of the battle was discovered in the area around Mill Lane and the Fenn Lane Roman road. Close to a proven medieval marsh is the much more likely site of Sandeford and was the find spot of the Bosworth Boar badge which is on private land 2.5km south west of Ambion Hill. King Richard’s Stone was moved to the above spot to allow better and safer public access and to allow the field at Shenton to be returned to agricultural use.

Packwood House is located in the village of Lapworth and has wonderful views of Two Pits Park and 1.5 hectares of formal gardens. The two storey late 16th century house derives its name from the Saxon ‘Pacca’s Wood’ with the earliest mention of the name dating to 1190 when Walter Chaplain of Packwood witnessed a deed. Much of the surrounding land belonged to the Benedictine monks of Coventry but after the Dissolution of the Monasteries in the 1530’s, the property changed hands repeatedly. Packwood House was sold to John Fetherston for £340 in 1598. The Fetherston family had been living in nearby Knowle since the 15th century and John is believed to have built the core of the present Packwood, including the tall gables of his new ‘great mansion howse’. 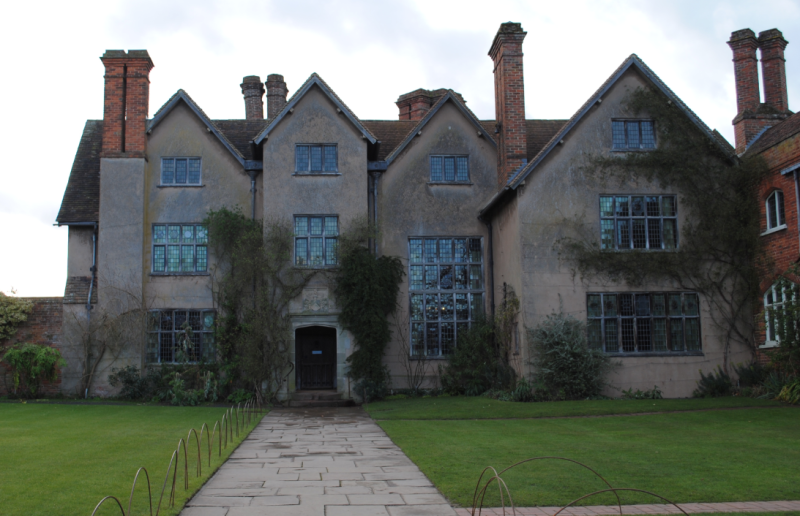 The inventory made in 1634 suggests that the building was furnished like a prosperous farmhouse. The timber framed building has been covered with cement render since the early 19th century and underwent an extensive restoration programme in 1925-1932. Supervised by Edwin Reynolds, the restoration included alterations to the interior, construction of the single storey Long Gallery and replacement of the 19th century fenestration with timber mullion and transom windows. 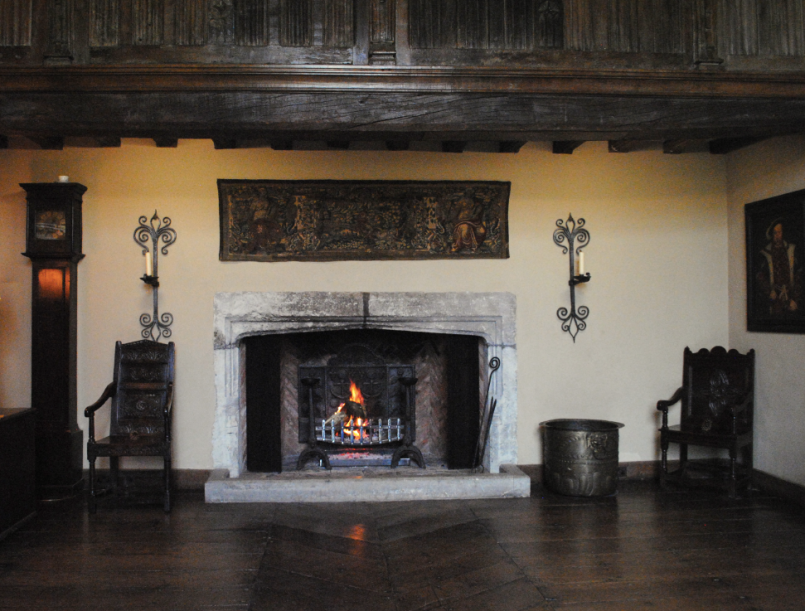 The Hall had a light oak balustraded gallery on three sides with a wrought iron chandelier before being substantially altered by Baron Ash in 1931. Characteristic of the Edwardian era, the walls were still pierced with mullioned windows and there was frieze high panelling. During the 20th century renovations, the timber ceiling was inserted, a single gallery of linenfold panelling was built and a new floor of oak from Lymore Park in Montgomeryshire was laid down. 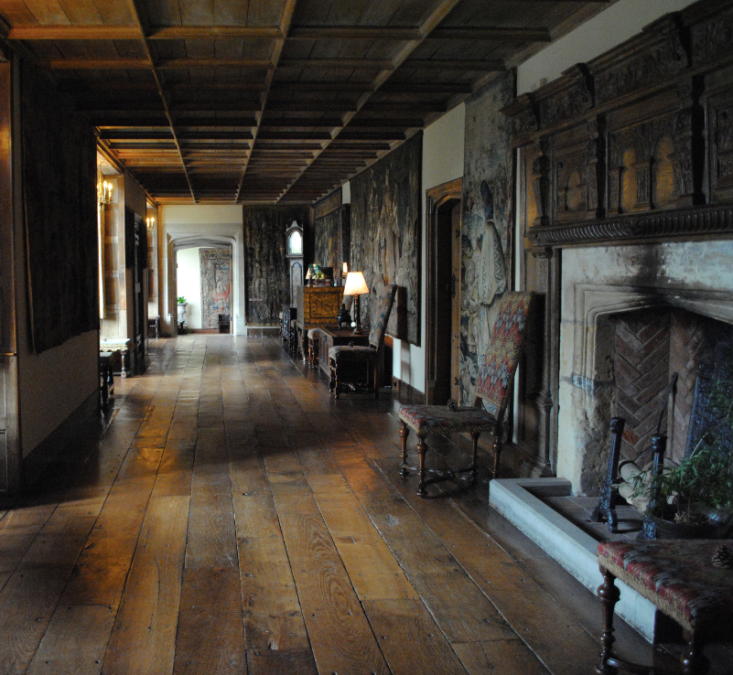 The Long Gallery was created by Baron Ash to join the two Great Halls together. His architect, Edwin Reynolds, had considerable experience of remodelling historic buildings such as Aston Hall and Blakesley Hall. The oak floorboards were taken from Lymore Park and the panelling taken from Shaftsmoor in Hall Green.

The Long Gallery is embellished with rich tapestries which include The Coronation of Marcus Aurelius and St Remy crowning Charles VII before Joan of Arc. 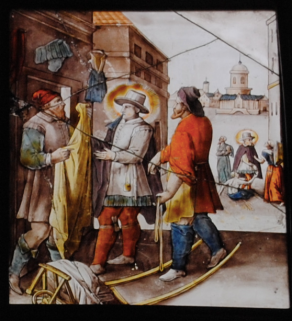 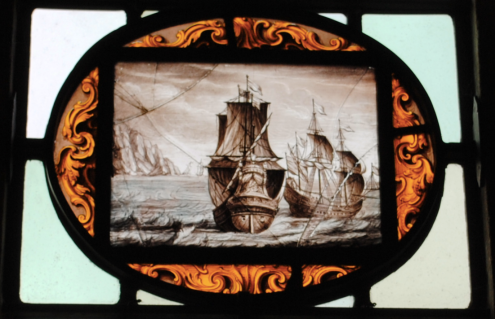 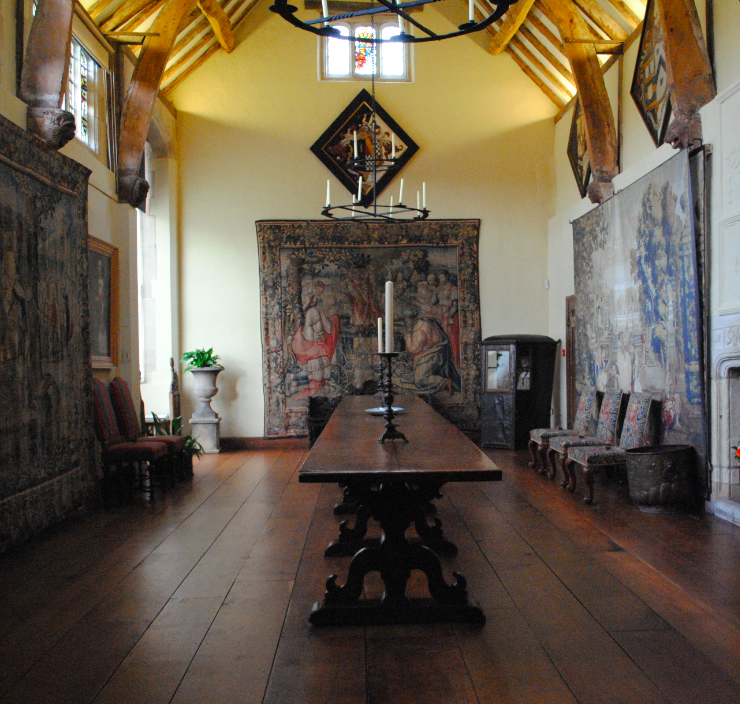 The Great Hall was formerly detached from the house and used as a cow-byre and barn. The 17th/18th century barn is linked on the north west corner of the house by the Long Gallery and it took its present form in 1924-1927. A sprung floor for dancing was installed and the hayrack has been adapted into a balustrade for the gallery. The grand oak refectory table measures 6.4 metres long and is the centrepiece of the room. The Jacobean pattern supports are early 17th century and the table was purchased by Baron Ash from Cecil Ferrers at Baddesley Clinton in the mid 1930’s. Pre-war photographs show that the table was previously placed against the tapestries in the Long Gallery. The beautiful exposed roof timbers spring from corbels modelled on originals at Carcasonne in south west France. The Great Hall is surrounded by stunning hanging tapestries some of which depict portuguese scenes, 16th century scenes portraying the story of Saul and a 16th century series from Brussels which were bought from Aske Hall in Richmond. 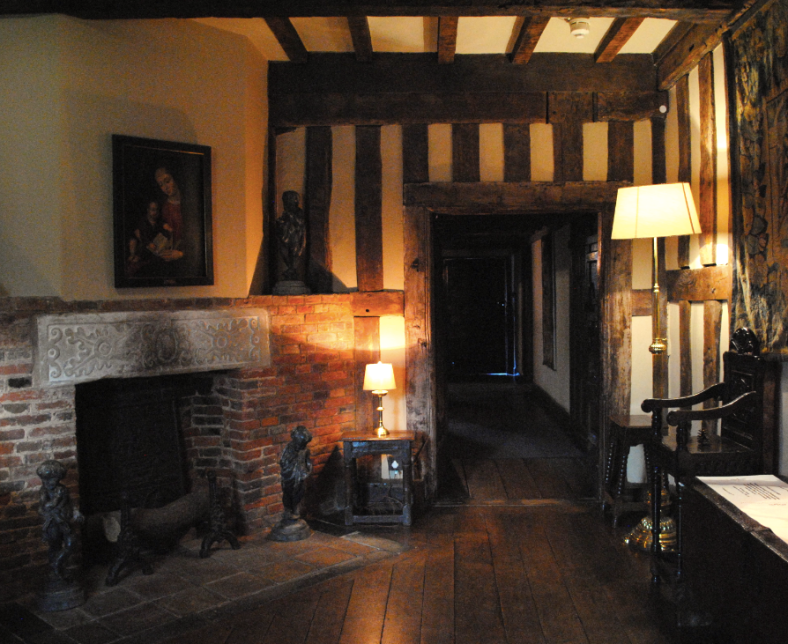 The Inner Hall is accessed from the west end of the Screens Passage. This was originally the entrance hall until the drive across the causeway in the park was given up in the 19th century. The wonderful original timber framing was revealed when the Edwardian panelling was removed. The room is decorated with mostly 17th century furniture and 17th century Dutch textiles bought from Baddesley Clinton. 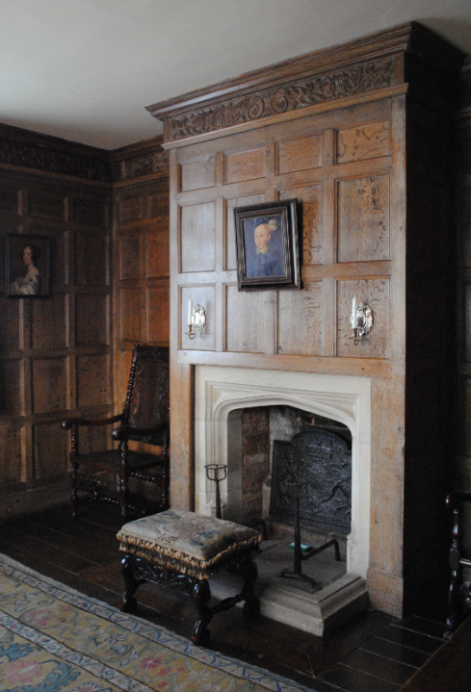 The Study adjoins the Inner Hall and has original, richly embellished, Jacobean panelling. The fireback is English and dates to 1635. Although the moulded ceiling beams are original, the Dining Room has been much altered. The focal point of the room is the 17th century English oak table with six walnut chairs which date to between 1650-1675. 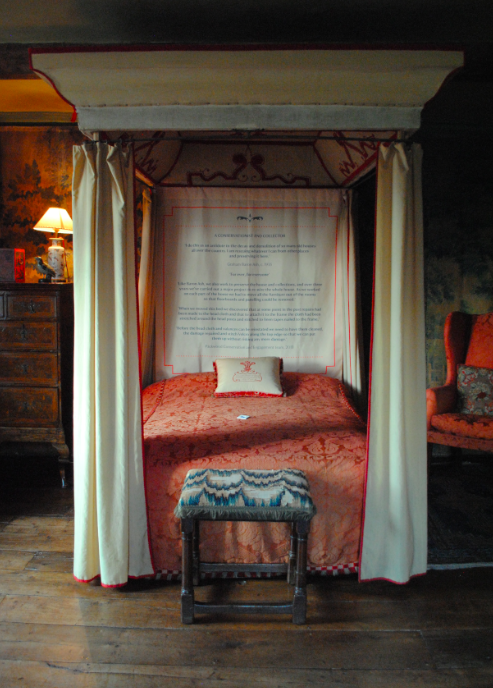 Queen Margaret’s Room is named after Henry VI’s Queen who is said to have slept in the bed (above) in 1471 before the Battle of Tewkesbury. The pillars and canopy are upholstered in a light woollen material with red braiding. The bed was bought by Baron Ash at the sale of the contents of Owlpen Manor in Gloucestershire in 1927. The cloth inscription above the bed reads:

“A conservationist and collector. I do this as an antidote to the decay and demolition of so many old houses all over the country. I am rescuing whatever I can from other places and preserving it here. Graham Baron Ash, c1935 “

When the Packwood Conservation and Engagement Team moved the bed, they discovered that at some point in the past, repairs had been made to the head cloth and that to attach it to the frame, the cloth had been stretched around the head posts and stitched to linen tapes nailed to the frame. Before the head cloth and valances were reinstated, they were cleaned and the damage repaired with stitch Velcro along the top edge. 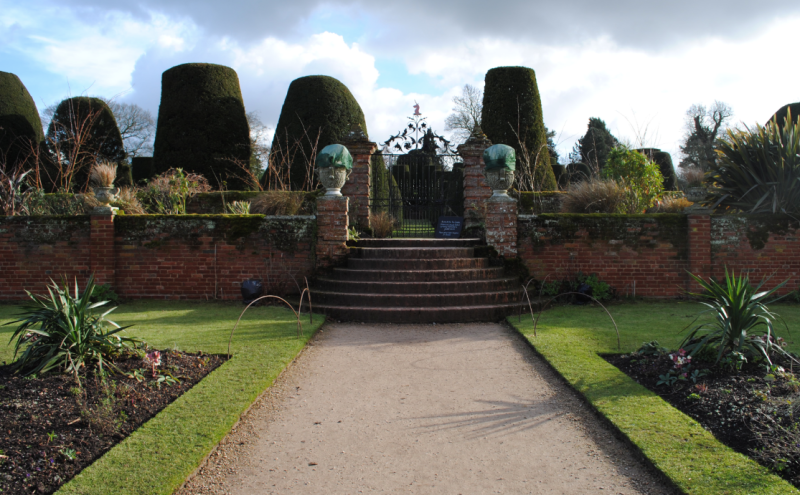 The Yew Garden, according to legend, represents the ‘Sermon on the Mount’ and are over 350 years old. Part of the ground was originally set out by John Fetherston between 1650 and 1670. The area in front of the house had remained as a lawn since the Second World War and the decision to reinstate this scheme was taken in 2004. The scheme restored the link between the house and the Yew Garden. Work was completed over two winters between 2005 and 2006 and the Breedon gravel paths offer a practical solution to Packwood’s numerous visitor numbers.