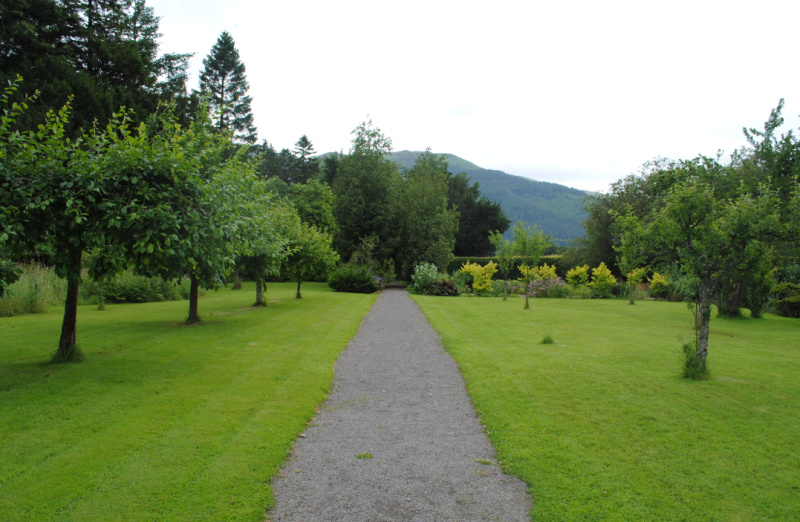 Overlooking Lake Bassenthwaite and surrounded by Skiddaw and Grisedale Pike, Mirehouse stands in the most idyllic of spots in Cumbria. With the ghosts of Tennyson, Wordsworth and Carlyle occupying every inch of the house and grounds, Mirehouse is appropriately described as “more than the sum of its parts, Mirehouse is the Lake District with hand on heart” (Jenkins, 2003). 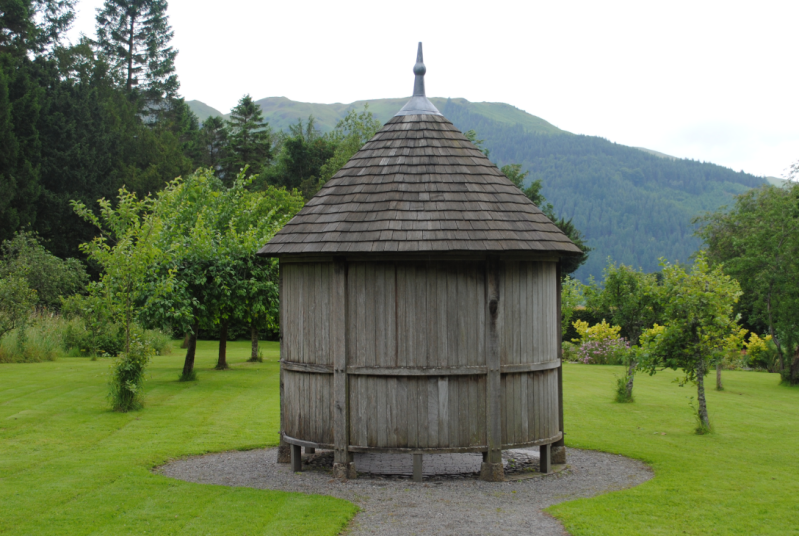 The Bee Garden is situated approximately fifty yards along the drive and emerges from the cover of the woodland into a spacious and sheltered walled garden. Created in around 1780, extensive restoration was carried out in the mid 1990’s. The plants that have been chosen provide nectar and pollen for the honey bees who in turn pollinate the flowers. In front of the hives is an inscription from Virgil’s Fourth Georgic which translates as “The first thing is to find a suitable site for your bees.” 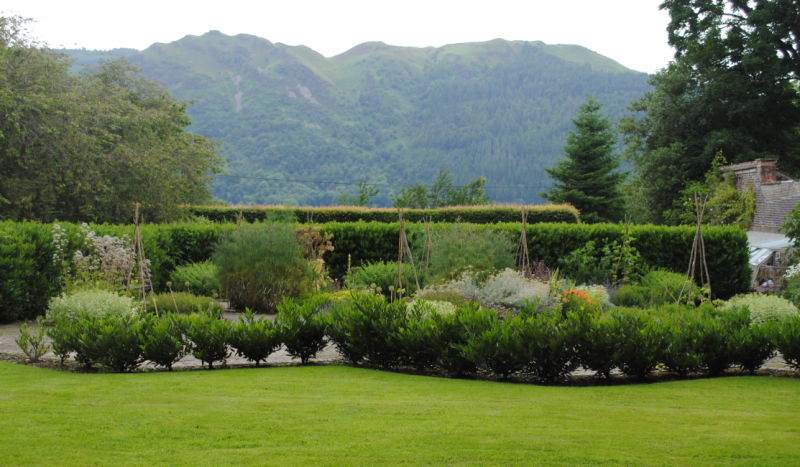 Propolis is the name given to a variety of resinous substances that bees gather and use to fill any cracks or holes in their hive. They smear it on the walls and combs and use it to completely coat any foreign bodies that are too big for them to eject from the hive, such as moths, small rodents or lizards. Most propolis is collected in the autumn during the hottest part of the day. Some races of bee build fortifications of propolis at the entrance, making defence easy, and probably helping to control temperature inside the hive. This is likely to be the origin of the word propolis – literally in front of the city. 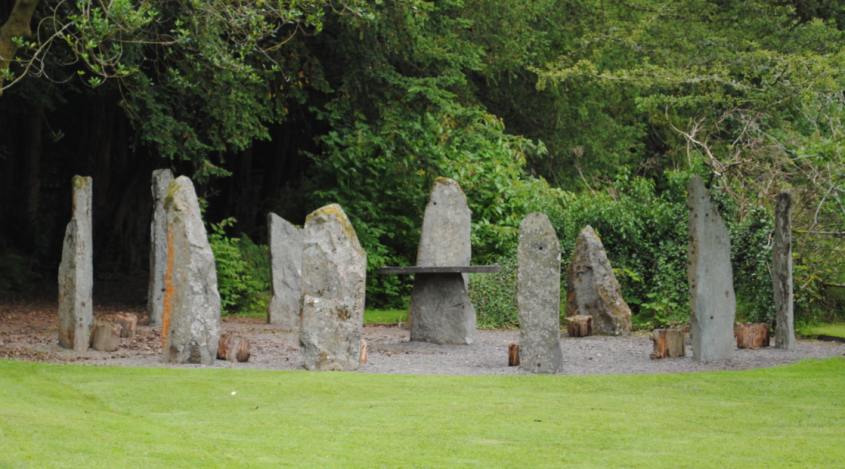 Knights of the Round Table

The Garden features a fernery and stone circle representing the Knights of the Round Table (above) as well as a herb garden, Cumbrian fruit orchard and apiary. 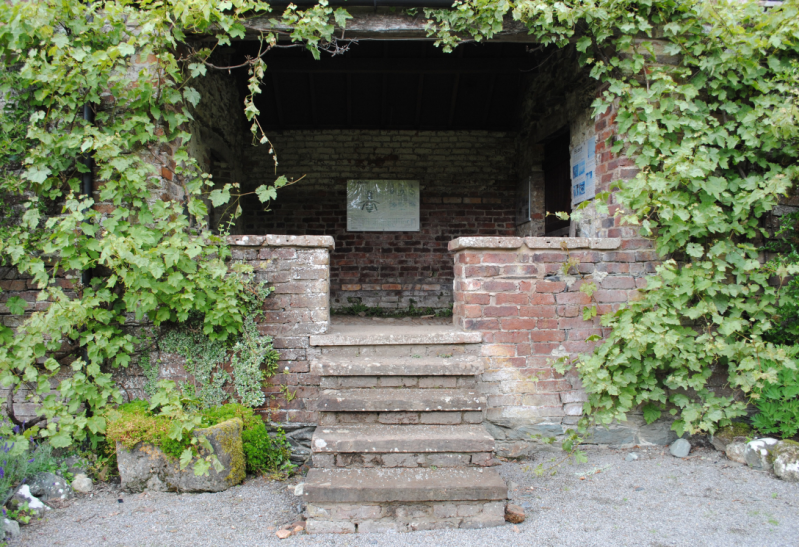 Royal Jelly is a whitish opaque substance which nurse bees feed to all young larvae. It is found in much larger quantities in queen cells and also makes up a large part of the adult queen’s diet. In order to produce royal jelly, a colony is encouraged to rear a large number of replacement queens. This is done by inserting a frame with artificial queen cells into a colony whose queen has been removed. Royal jelly is reputed to have a stimulating effect on people suffering from fatigue or depression.

A plaque (above) notes the purest of human pleasures is that of a planted garden – taken from Francis Bacon’s Of Gardens. “It is the greatest refreshment to the spirits of man; without which, buildings and palaces are but gross handiworks; and a man shall ever see, that when ages grow to civility and elegancy, men come to build stately sooner than to garden finely; as if gardening were the greater perfection. I do hold it, in the royal ordering of gardens, there ought to be gardens, for all the months in the year; in which severally things of beauty may be then in season. The green hath two pleasures: the one, because nothing is more pleasant to the eye than green grass kept finely shorn; the other, because it will give you a fair alley in the midst, by which you may go in front upon a stately hedge, which is to enclose the garden. For the ordering of the ground, within the great hedge, I leave it to variety of device; advising nevertheless, that whatsoever form you cast it into, first, it be not too busy, or full of work. Wherein I, for my part, do not like images cut out in juniper or other garden stuff; they be for children. Little low hedges, round, like welts, with some pretty pyramids, I like well; and in some places, fair columns upon frames of carpenter’s work.” 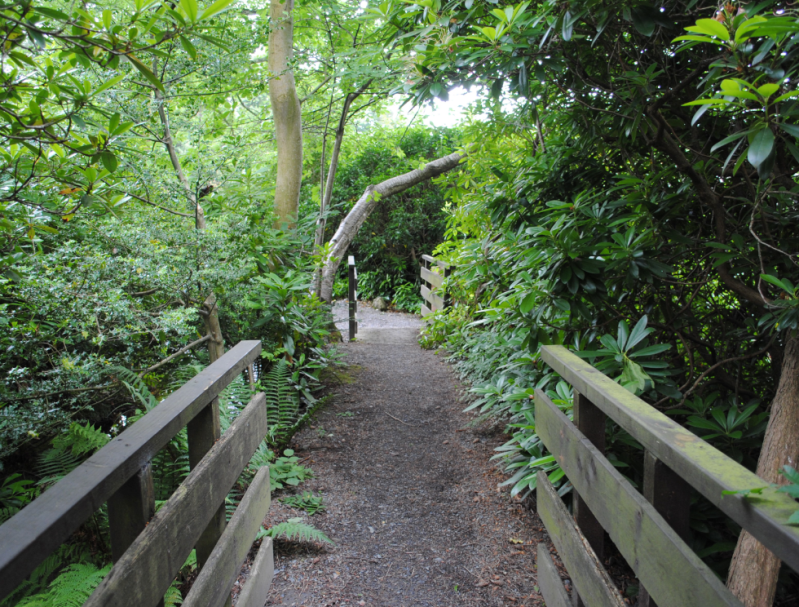