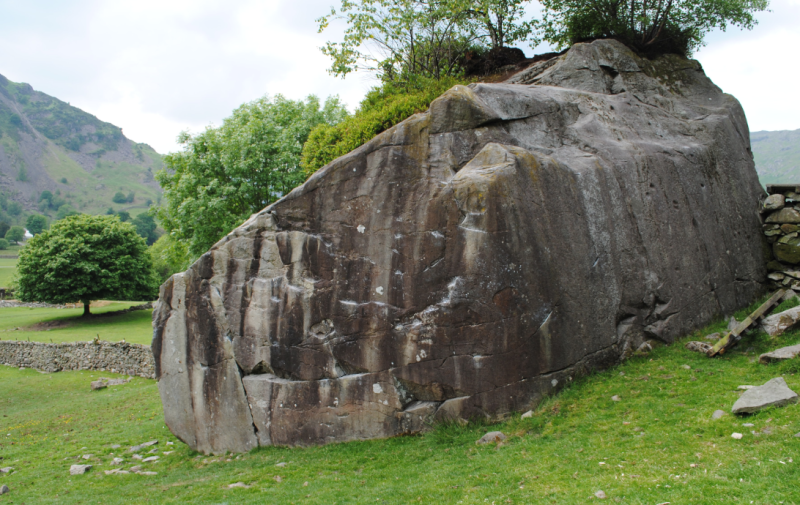 When Europe was first coloniszed by man the area of Cumberland and Westmorland was, as was the rest of northern Britain, covered by ice during the glacial periods. The earliest settlers made their appearance at the end of the last glaciation which included small bands of hunters following herds of game and constructing temporary encampments on the coast, and on the shores of lakes and rivers. Unassociated with any permanent structure, characteristic microlithic flint equipment has been found at several sites in Cumberland – Drigg and Eskmeals are two examples. These Mesolithic settlements were followed by the first farming communities and a considerable increase in the population. One of the most important temporary encampment and flint knapping sites is located at Ehenside Tarn which was revealed in the 19th century when the tarn was drained. A series of hearths, a dug out canoe, fish-spears and throwing sticks made of wood were all preserved in the waterlogged conditions. The axe factories of Great Langdale provided extremely good examples of axes of igneous rock and the slopes of Great Gable, Scafell Pike, Pike of Stickle and Harrison Stickle are littered with flakes of these axes. The axes from Langdale were traded all over England and Scotland with the most notable concentrations being discovered in Wessex and the Upper Thames region (Pevsner, 1967).

Thousands of enigmatic symbols can be found carved onto rocky outcrops and boulders across northern England and range from simple circular hollows, known as cups, to more complex combinations of cups, rings, grooves, spirals, lozenges and chevrons. Created by Neolithic and Bronze Age people who lived in these lands, some of these wonderful abstract designs occupy incredible locations in the landscape and can be found on prehistoric stone monuments or in burial mounds. One of the most intriguing elements of the archaeological landscape, their original purpose remains unknown. In every continent the oldest rock art so far discovered are cupules and linear grooves. Cupules can be found in very early and archaic traditions and they are numerically the most common forms of surviving rock art (Bednarik, 2007). It is unlikely that all cupules were made for similar purposes and it is thought possible that some of those found on horizontal surfaces were used for some utilitarian process. Cupules usually form groups, sometimes in the hundreds or thousands, on just a single panel and in some traditions they tend to be arranged systematically, while in others they were made randomly.

Prehistoric carvings which have been cut into the surface of a rock is the primary definition of the term ‘rock art’. The majority of art from the Neolithic and Bronze Age periods in Britain and Ireland is unique in that it is entirely abstract and unlike that found elsewhere in Europe. In England, the majority of prehistoric rock art is found on outcrops and earth fast boulders and is described as ‘landscape’ or ‘open-air’ rock art. Associated with monumental structures, ‘megalithic art’ ranges from Neolithic stone circles to Bronze Age burial cists while other rock art consists of smaller stones which may have no prehistoric context and which have sometimes been re-used in modern structures. This particular rock art is referred to as ‘portable’ or ‘mobiliary’ art (Sharpe, Barnett & Rushton, 2008). Carved stones are usually found in clusters and most British rock art occurs in the north, across an area between West Yorkshire and the Caledonian Canal in Scotland. The majority of rock art in England is found on sedimentary rocks, such as the Millstone Grits of Yorkshire and the Fell Sandstone of Northumberland, and the distribution is thought likely to be related to the underlying geology. In western Britain, like Cumbria, carvings are also found on igneous and metamorphic rocks such as granites and schists. The single cup mark is a roughly circular hollow between 3cm and 10cm in diameter and approximately 2-3cm deep. Also common in Britain are rings and grooves which can occur individually or can be combined to form more complex motifs. The two broad traditions of rock art that have been identified in Britain are the ‘passage tomb’ art, associated with chambered tombs, and the most prevalent ‘cup and ring’ art. Created by striking the rock surface using a stone tool, some carvings have peck marks remaining visible on panels that have been protected from the elements. Although several small fragments of red ochre have been found during excavations at the Hunterheugh rock art site in Northumberland, there is no evidence that motifs were coloured (Sharpe, Barnett & Rushton, 2008). In the passage of time the meaning of rock art has become lost with no historical record of it until the late 17th century when reference is made to marks found on stones from the Newgrange passage tomb in Ireland. The local antiquarian George Tate was the first to report the ‘cup and ring’ rock art at Old Bewick Hill in Northumberland during the 1820’s. Interpreting prehistoric rock art will always present challenges given that the societies which created them used very different systems of communication and symbolism to that of our own. The symbols and their various combinations undoubtedly had very definite meanings for the people that created them as the restricted and repeated repertoire of symbols across the landscape implies a shared vocabulary. Regional variations in motifs used and where rock art was placed in the landscape also adds to the complexity of deciphering exact meanings. Factors such as geology, survival and the incomplete nature of rock art present further difficulties however, the fact that the practice of carving rocks continued for such a lengthy period suggests that the symbols had enduring significance and their power and meaning evolved for the people who lived amongst them. 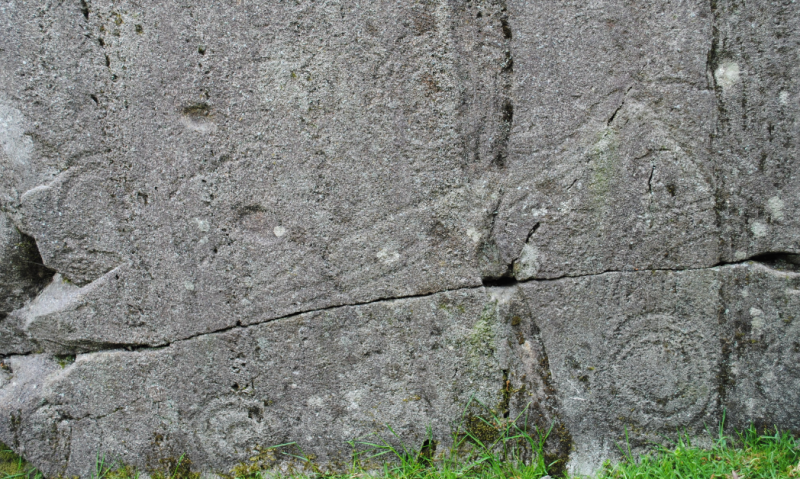 As researchers have extended the study of rock art to include the surrounding topography, the soil beneath and the wider archaeological landscape, numerous theories have since been put forward to account for the carvings. Often found on, or close to, striking natural features such as outcrops, unusual boulder formations, plunging waterfalls, caves, rivers and cliffs, it is thought that such dramatic locations would have evoked emotional and imaginative responses and as such, possibly formed part of the mythical landscape of the past. Such connections to specific places can be created through shared social events or natural catastrophes so rock art may have been used to permanently record an attachment to special places. Some rock art points to a connection with movement across the land given the deliberate positioning of carvings on relatively high ground, often with extensive views, and possibly along route ways. Associations with specific routes are problematic since few actual prehistoric tracks have been identified yet decorated stones are often found at the entrances to possible routes inland, close to mountain passes, along the edges of valleys and overlooking natural harbours. Other rock art can often be found in locations that may suggest a strong spiritual element to the role of the carvings. Considered the domain of supernatural beings or ancestors, ‘liminal’ locations (where dark meets light, where mountains touch the sky or the sea reaches the shore) were significant to hunter gatherer communities. The occurrence of carvings in such places suggests a religious significance to the motifs and possibly used to mark the focus of links between past and present, the living and the dead or between real and spiritual worlds. The spiritual connection to place ideology is thought likely to be the most credible association between the carved boulders, known as the Langdale Boulders, and the nearby Langdale Pikes (Sharpe, 2016). 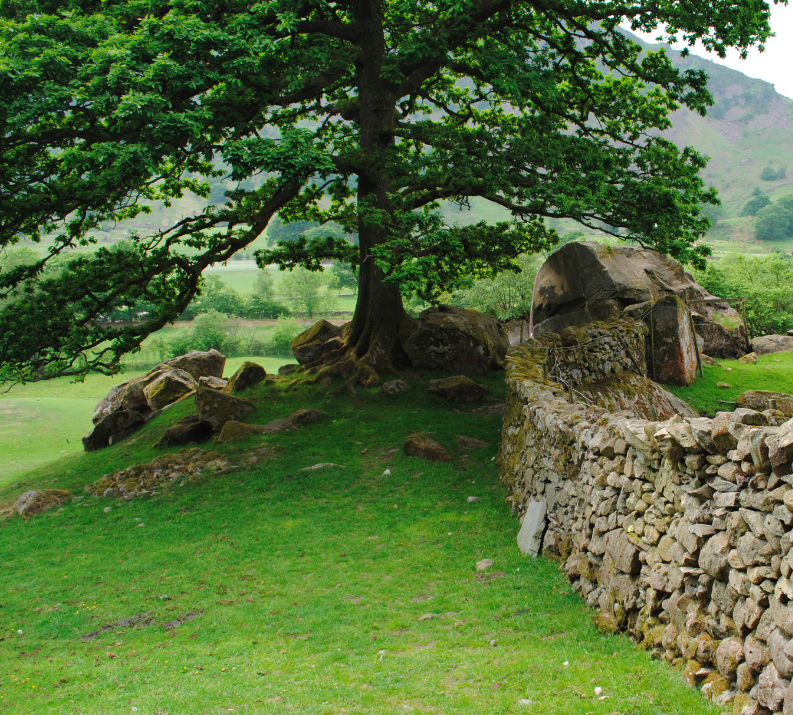 The Langdale Boulders are two prehistoric rock art sites which consist of two large boulders of Andesitic tuff a few metres apart. In their current position when carved upon, the rocks contain multiple concentric circles, a linear feature in the shape of a chevron, numerous cup marks and many other unusual motifs. Some of the man made cup marks are surrounded by rings with others believed to have been formed by natural erosion (Beckensall, 2002). As rock art is considered to be an important element of the cultural landscape of northern England, strategies for recording, conservation and management have been introduced in order to ensure the survival of such nationally significant sites. Using a combination of visual techniques, site survey and mapping and textual recording, the recording methodology has continued to develop. Using the principle of stereo photography, where two images of the same subject are taken from slightly different positions, photogrammetry is a non intrusive method that provides a means for accurate measurement of archaeological features and artefacts through 3D recording and visualization. Presenting a 3D image as a contour model to accentuate the topography of the rock, geological and man-made features can clearly be exposed. Precluding a single view-point perspective, the ability to view the object in different ways and by providing a more accurate model of an artefact or monument than conventional 2D recording techniques, the benefits of such technology enhance the potential for accurate recording and monitoring. Together with more established techniques such as excavation and surveying, photogrammetry and laser scanning technologies are revealing new information on rock art. Although carved in stone, the rock art which survives today is extremely vulnerable. The creation of an accurate record of all rock art, the England’s Rock Art (ERA), has been fundamental to research, protection and management of this fading link with our prehistoric past. As new initiatives and projects got underway in Cumbria earlier this year, it is hoped that the research will further our understanding of this fascinating landscape and ultimately, allow the development of appropriate management strategies to ensure that the most vulnerable rock art panels are protected and preserved.

The Langdale Boulders are a Scheduled Ancient Monument.