Fosa is a harbour located next to the east walls of the city in Zadar. The small picturesque port of Fosa is next to the Renaissance Land Gate (Kopneva Vrata) which was once the main entrance into the old town of Zadar.

Located in front of the church of St Donat is a municipal square from the Roman era. In the second half of the first century BC, Zadar became a Roman colony. As such, Zadar was developed in the typical Roman tradition used in the design of military camps (castra).

The centre of public urban life was the Forum which in Zadar, was started by the first Roman Emperor Augustus. The open central square (lastricat) was the largest on the eastern Adriatic coast measuring 95x45m.

During the period of late antiquity, the foundations of Christian buildings were laid which later developed into an episcopal complex consisting of several buildings built from the 4th to the 19th centuries.

There was a temple dedicated to the Capitoline Triad, Jupiter, Juno and Minerva which were supreme deities worshipped by the Romans. The temple would have been located in the middle of the capitolium (worship area). 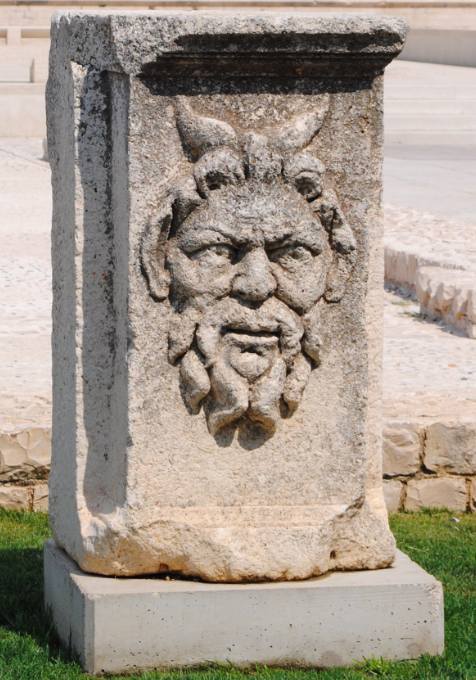 Located across the remains of the Roman Forum from the Church of St Donat is the Church of St Mary (Crkva sv Marije). Established in the 9th century as a Benedictine nunnery, it was founded by a noblewoman named Cika, a daughter of a powerful local nobleman named Madije. Cika became its first abbess and the Croatian king Petar Kresimir IV donated the church to her. A new Romanesque, aisled basilica, was built in 1091 of which much is preserved today despite undergoing reconstructions on two occasions. It was enlarged with the addition of two bays in 1507 and had a new Renaissance front, a circular gable and southern front. After victory and the conclusion of peace in 1105, King Koloman endowed the construction of the campanile and the chapter house, the first High Romanesque buildings in Dalmatia. The four capitals supporting the groin vault in one of the first floor rooms, one of the oldest in Europe, have the King’s name inscribed. In 1742-44, the interior was redesigned in the Baroque style and richly stuccoed. In the 19th century the interior was renovated again in Classicist style. Almost totally destroyed in 1943-44 by air raids, it was reconstructed in the 1970’s. Since reconstruction, the western and northern nunnery wings have been used for the permanent exhibition of religious art. Objects produced by Zadar’s goldsmiths during the Gothic period are on display here.

The oldest Dalmatian Gothic church is the church of St Francis (Samostan sv. Franje Asiskog) also known as the Monastery of St Francis of Assisi. The monastery and church were built in 1221 and consecrated in 1282 by Bishop Lovro Periandar. It has a single nave with a raised shrine. Considered significant in the history of Croatia , the sacristy is the place where the Peace Treaty of Zadar was signed on 18th February 1358 between the Venetian Republic and the Hungarian-Croatian King Louis I Angevin. This act led to the Venetians abandoning their claim on Dalmatia.

Located just behind what remains of the Roman Forum sits the Church of St Elias (Crkva sv. Ilije), the only Orthodox church in Zadar. It is situated on a Roman Capitol near to the Pillar of Shame and built upon the site of the former medieval church of St Elias. 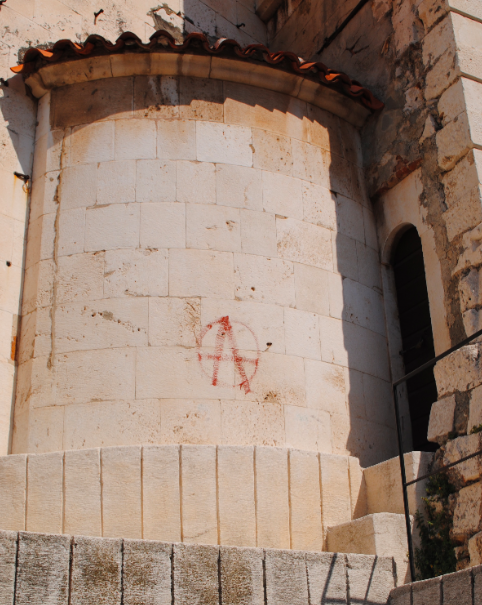 The church was originally used by Greek sailors and merchants and later served the Serbian community.

Redesigned in the Baroque style in the late 18th century, a church tower was added on the eastern side. All four stages of the tower were of a unique design featuring different shaped and sized window openings, carved figure heads on the third stage of the tower and engaged columns on the fourth stage.

After World War II, the resulting clearing of ruins led to the discovery of the remains of flagging, parts of the portico, basilica and tabernae near to the church.

Located in the green park and in the quiet old neighbourhood of Kampo Kastelo is the little  church of Our Lady of Our Health. On the site of two much older churches, it was built in 1703. Later in the 18th century, the church had the addition of a nave which was later destroyed. In 1895, the church was dedicated by the then Archbishop of Zadar, Grgur Rajcevic. During the Croatian War of Independence (1991-1995), the church had been devastated and as a result, was renovated in 1995. The rotunda of the church is bright orange in colour and the church features an octagonal bell tower with three cherubs on plinths above the pedimented entrance. 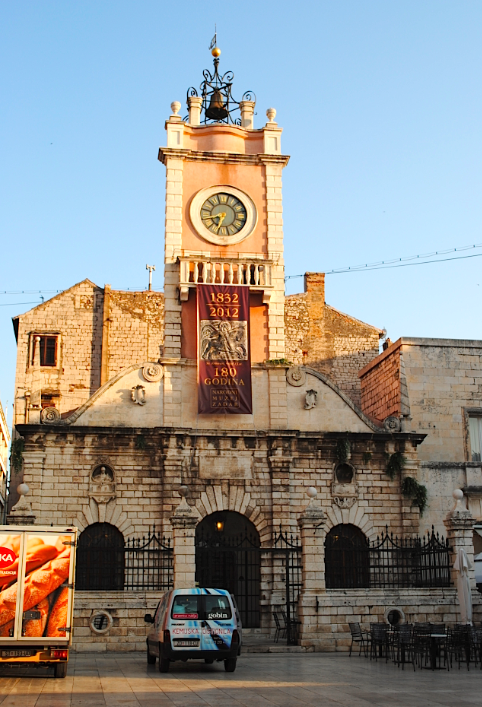 Located in Narodni Trg (People’s Square) is the City Guard or “Gradska straza” as it is known by the locals. The Narodni Trg is the main square of the town, platae magna (large square), and is the centre of public life in Zadar. The foundations to municipal buildings were laid in the square during the early Middle Ages. During the Venetian reign in the 15th century, the church of St Peter and the Municipal Loggia which had been built here, were destroyed. Designed in the 16th century by the Venetian architect Michele Sanmicheli, the building is now home to a modern art gallery.

The building is of late Renaissance style having a large central  clock tower and is surrounded by a stone wall with holes for cannons, both later additions. Michele Sanmicheli was a Mannerist architect and famed for his numerous military fortifications. Born in 1484 he travelled from 1537-1539 to Corfu, Crete and Dalmatia to design such fortifications. 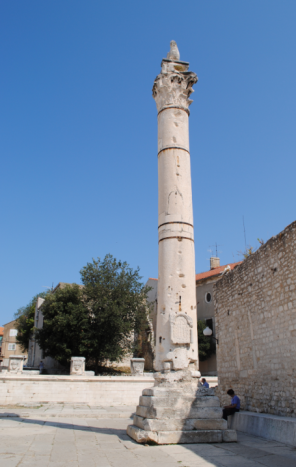 Founded by the first Emperor Augustus, the Roman Forum in Zadar was the largest on the eastern shore of the Adriatic. To the side of a raised area where once a temple dedicated to Jupiter once stood, stands the 15m high Pillar of Shame (above). During the Middle Ages, this is where sentenced people were chained and humiliated. It was used for this purpose until 1840. The Lion of St Mark was a later addition to the top of the column by the Venetians.

The Square of Five Wells (Trg Pet Bunara) is located between the medieval city walls and the park named after Queen Jelena Madijevka. Built to withstand the Turkish sieges of the 16th century, the square features five ornamental wellheads from where the square acquired its name.

The venetians built a large drinking water cistern to supply the five wellheads. A remnant of the city’s defence system, the Captain’s Tower, is located on one corner of the square. 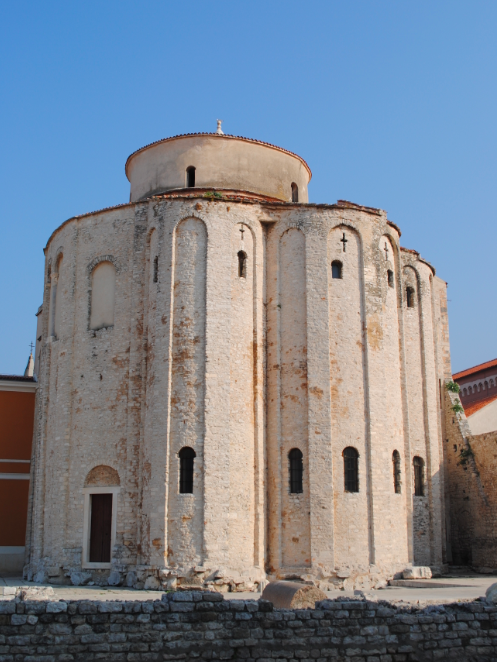 Dating to the time of the Carolingian Empire in the 9th century, the Church of St Donat (Church Sv.Donato) was constructed by the Dalmatian Bishop and Diplomat, Donatus of Zadar.

Built on the top of the old Roman Forum, the exterior of the church incorporates stone work from the old structure.

The interior floor of the church was removed exposing the original stone work, stone slabs and column fragments of the Roman Forum upon which it was built.

The circular Byzantine church features three apses and an ambulatory.