The medieval castle in Cesis dates back to the 13th century when the ancient hillfort was home to the Livonian Brothers of Sword. Constructed of dolostone, the castle suffered serious damage during the Livonian Wars. The castle was besieged by Russians in 1577 during which time the western part of the castle was blown up.

Surrounded by a moat on its south side, the castle was naturally protected by the steep slopes formed by the Gauja River valley. The fortifications have undergone a series of rebuilds and expansion over the course of its history with most of the surviving structure dating to the late 15th and early 16th centuries. 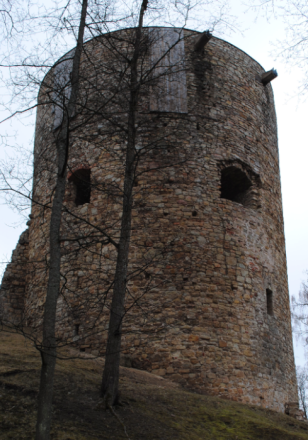 The rounded tower dates to the latter half of the 15th century. Three of five such towers survive today with the loss of a tower in both the north and south corners. The castle has been undergoing restoration since 1952.

Located on the edge of the pond in Pils Park Cesis are two fishermen retrieving nets, sculpted in stone.

The stone sculptures are the work of the Latvian sculptor R. Āboltiņa and adorn the edges of the stairs which lead up through the park. 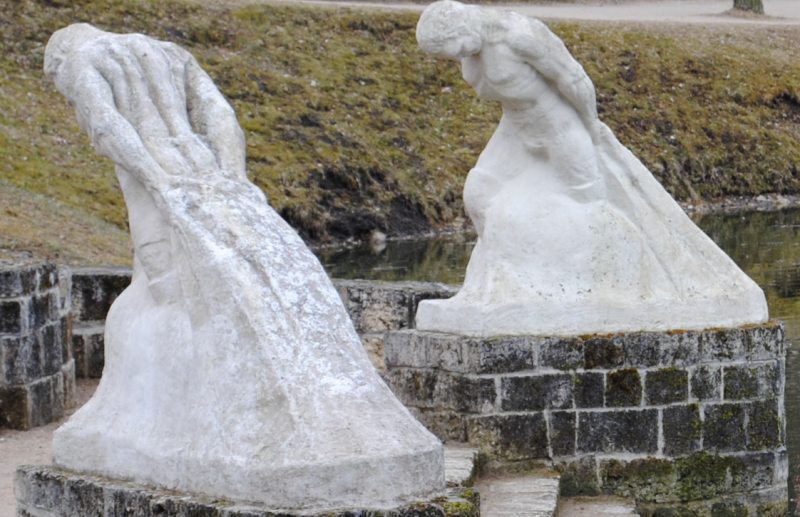 The sculptures date to 1936 when the area was landscaped and improved.

In the heart of Cesis is the ancient market place known as Rožu laukums – Rose Square. The square was used as a market place from the 13th century and is once again at the heart of life in the Old Town. Retaining features of the medieval square, the area was regenerated in 2008 and features a paved area of granite, boulder and concrete.

Carl Gustaf von Zievers was born in 1771 and was owner of Cesis Castle manor estate. In 1832 he established the Castle Park creating a tranquil landscape setting incorporating the castle ruins, streams and bridges.

In 1908, Carl’s son Emanuel had the above bronze bust placed upon a podium paying tribute to his father’s creation. The bust is located on Carl Hill in the castle park grounds.

In the garden of the Kristus Apskaidrošanas pareizticīgo baznīca are the tombstones where two members of the Sievers family are buried. The Sievers family owned the manor of Cesis Castle from 1777 for the next 140 years. Emanuel Graf von Sievers was born in Cesis and entered the Russian civil service. He became steward of the Russian Empire and married Countess Elise Koskull. Emanuel died at his castle estate in 1909. The plain marble tombstones are where Emanuel (above left) and his wife Elise (above right) are laid to rest.

Located high on a slope overlooking Cesis Castle Park is Kristus Apskaidrošanas pareizticīgo baznīca – Christ Transfiguration Orthodox Church. On the orders of Earl Karl Sievers, the church was built in 1842 on the foundations of a former temple on the site.

The highly colourful church features two raised pinnacled domes and plain engaged pilasters on each facade of the building.

Outside St John’s church along Torna Iela stands the sculpture of an old man carrying a lantern. The bronze sculpture is called Gadsimtiem ejot which translates as The Centuries. It was created in 2005 to mark the 800th anniversary of Cesis (2006) and is the work of the Latvian sculptor Matiass Jansons. 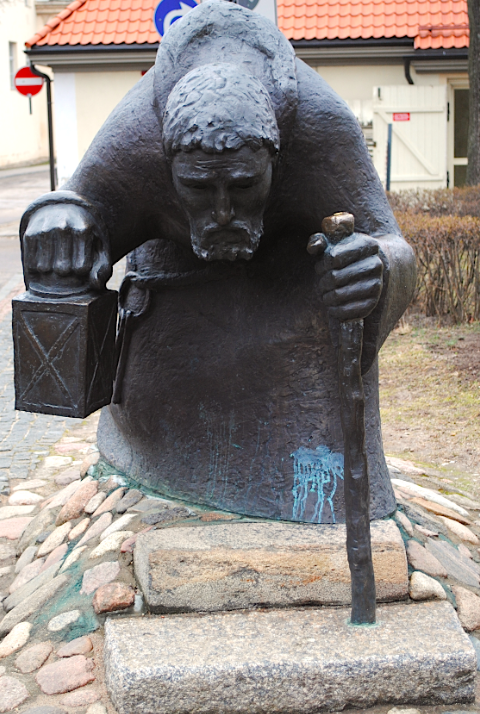