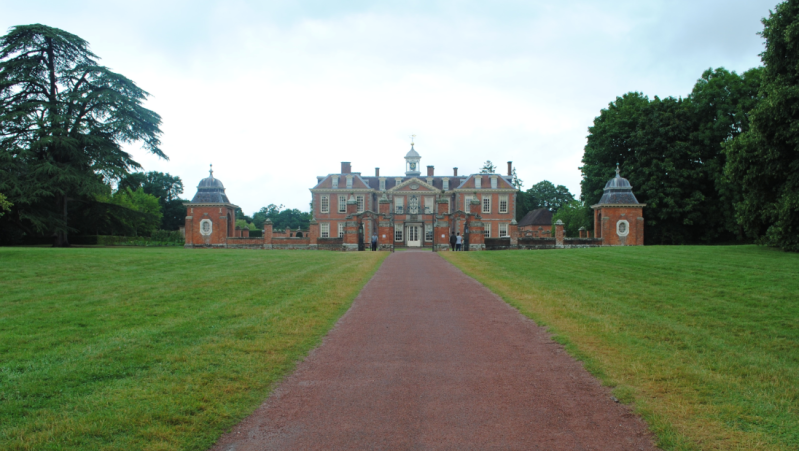 Hanbury Hall stands in stunning parkland in the district of Wychavon in Worcestershire. Hanbury was acquired by the Vernon family, rich lawyers, in 1631 and was expensively rebuilt by Thomas Vernon in the 1690’s. A talented lawyer at the Courts of Chancery, Thomas Vernon was supplied with designs for the hall by three men – William Rudhall, James Withenbury and John Chatterton. Closest to what was built is the designs of William Rudhall who came from Henley In Arden. The building is constructed of red brick in Flemish bond with ashlar dressings and features prominent wings which flank a recessed central entrance beneath a deep pediment. The two storey hall also features a central octagonal cupola which is said to “rise like a Dutch gallant with a weak chin” (Jenkins, 2003). Little changed from the original plans from the end of the 17th century until it was acquired by the National Trust in 1953. Showing considerable signs of wear and tear, Hanbury has, thankfully, continually been conserved since it came into the care of the Trust.

Thomas Vernon commissioned the artist Sir James Thornhill to create the wall and ceiling paintings that lavishly adorn the interior. Thornhill was the only British large scale painter of the time and his work on the cupola of St Paul’s Cathedral is his most famous. Entering the main hall (above), you are immediately greeted with an assembly of classical deities. Representing an open-air gallery, the fabulous wall paintings are set within architectural surrounds and depict the story of the Greek hero Achilles. At the time of building Hanbury, a painted staircase was a statement of wealth and with an increased interest in classical civilisations, the story of Achilles and the Trojan War was a fitting mythological theme to be depicted. The Great Staircase is cantilevered and features turned and fluted balusters. The panelling on the walls is finely carved and grained to represent walnut although it is actually made of pine.

Although adapted in the 18th century, the downstairs rooms are of a conventional 17th century house. The upstairs rooms are furnished with four-poster beds, porcelain and paintings. Flanked by wild Baroque doorcases, the Gothick Corridors are so named after the wallpaper that decorates the walls. Inspired by wild nature and emphasising strong colours, the Gothick style relates to the art forms prevalent in Northern Europe from the 12th to the 15th centuries.

Hanbury was a parish belonging to the church of Worcester at the time of the Domesday survey in 1088. From the Norman Conquest onwards, Hanbury was within the boundaries of the Royal Forest of Feckenham and with harsh forest laws, only chosen officials could hunt in such designated areas. After Feckenham lost its royal status in 1629, local families, including the Vernons, bought up land to increase their estates.

The Formal Garden at Hanbury is part of the grand plans from George London which were laid out for Thomas Vernon in circa 1700. Consisting of intricate and symmetrical parterres and different areas divided by clipped hedges or walls, work to restore the Formal Garden, made up of six parts, began in the early 1990’s. During the late 18th century, London’s work at Hanbury was replaced with the more informal landscaping style of Lancelot Capability Brown. The old stables and farm buildings were demolished at the same time with the kitchen garden removed to a new walled enclosure away from the house. 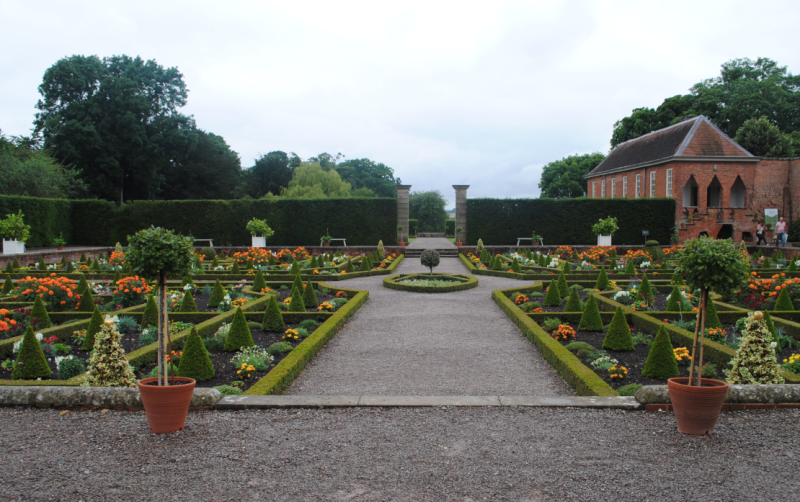 In 1865 Thomas Bowater Vernon commissioned R.W.Billings to design a new forecourt with elaborate brick gate piers, archways and railings with gazebos at the corners. Although they are Victorian interpretations, they echo the original pavilions seen in early 18th century drawings. With the aid of generous bequests and a European Union grant, the Formal Garden and the avenues leading into the park have been returned to their original splendour. 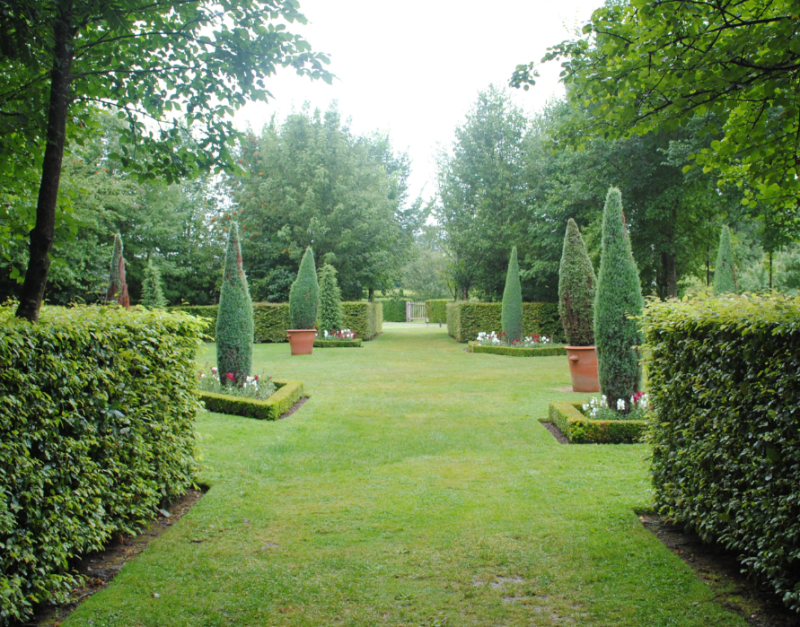 “A fayre Parcke, which though in thys paryshe is styled Feckenham Parcke, sooting in name with the Kynges vast forest, reaching in former ages far and wyde. A large walke for savage beastes, but nowe more commoudyously changed to the civill habitations of many gentell-men, the freehoulds of wealthy yeoman and dwellings of industrious husbandmen.” Thomas Habington (1560-1647) 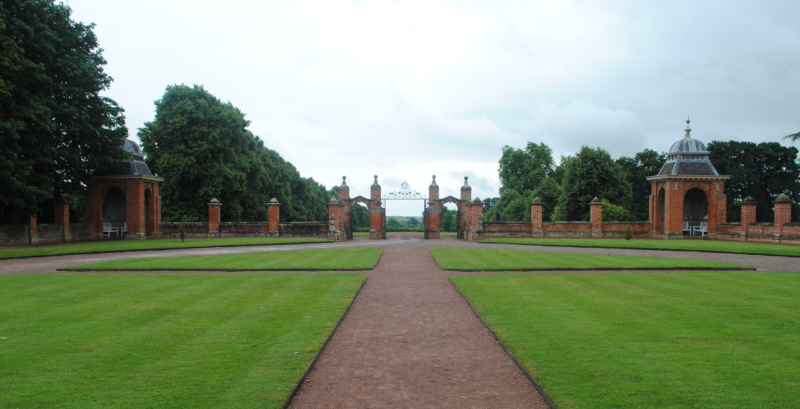 Hanbury Hall is Grade I Listed. 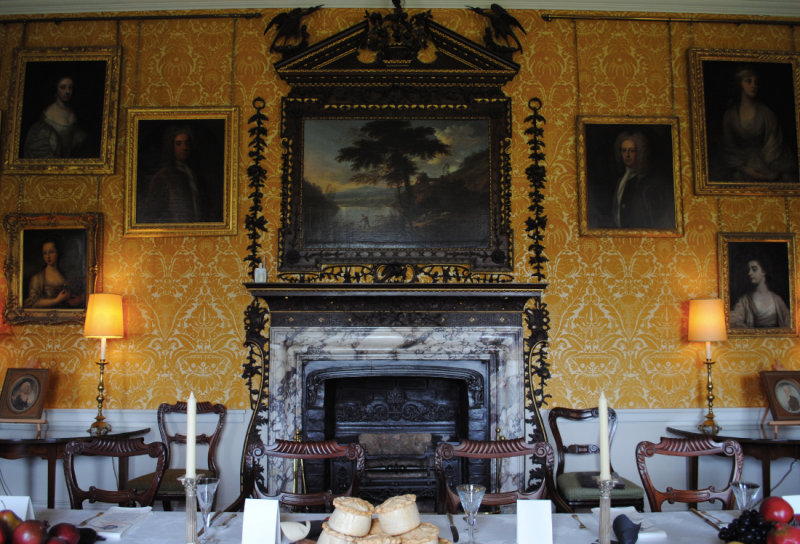 The Dining Room at Hanbury Hall is on the north east side of the building and was originally split into two rooms – the Withdrawing Room and the Lobby. The Lobby was an entrance for the Vernon family and the Withdrawing Room was part of the state apartment built for Thomas Vernon. A talented lawyer at the Courts of Chancery, Thomas built Hanbury in the early 18th century and he commissioned the artist Sir James Thornhill to create the wall and ceiling paintings which adorn the building. According to the plans of the architect Matthew Habershon, this room became a dining room after 1830. The Rococo chimneypiece (above) dates from 1760 and stands over an earlier chimney surround.

The room features elaborate furnishings which include a mahogany dining table dating to circa 1835 and part of a Chamberlain Worcestershire service with the Vernon crest and motto (below). The carpet was specially woven for the room in Turkey in 1992-1993. Various members of the Vernon family feature in an impressive collection of family portraits around the room and the classically themed ceiling depicts Aurora and Apollo. 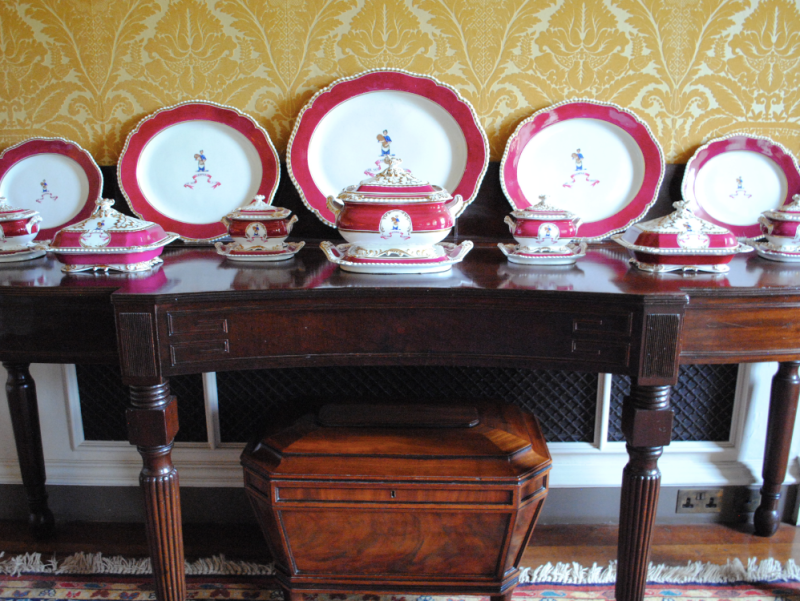 The dining table has wonderful napkins which detail various members of the Vernon family and their connections (below) and are well worth browsing. 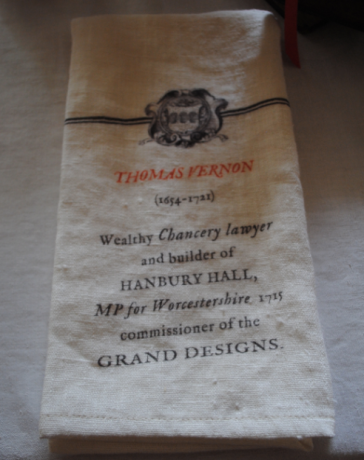